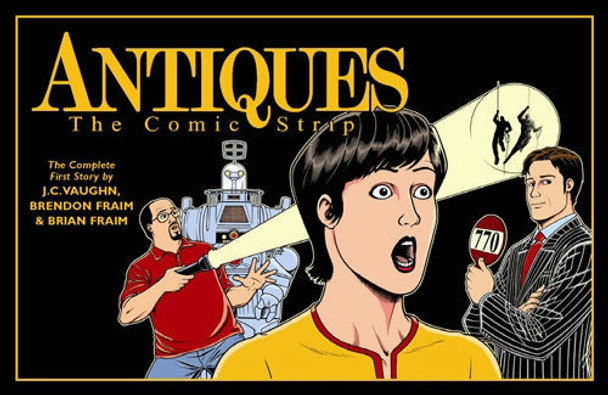 The death of billionaire Jackson Reynolds throws his impossibly high-grade collection of pop culture artifacts into most comprehensive auction the world has ever seen and attracts competitors from around the globe, including a colorful cast of interested parties who are not what they seem…

Packed with real life guest stars and cameos from the world of collecting – including legendary Spider-Man, X-Men and Fantastic Four creator Stan Lee – Antiques introduces readers to Reginald Winston and William Winston. The last members of a once-proud transatlantic family, other than blood they have three things in common. First, they’re both antiques dealers. Reginald is a fine antiques dealer in London; William is a junk dealer in Chicago. Second, they don’t speak. Third, they’ve each got a secret.

Then comes Suzie Magee, the beautiful expert hired to supervise the mammoth security concerns of the auction. Once they meet her, they suddenly have another thing in common.

Beginning in June 2006, Antiques: The Comic Strip ran weekly in Antique Trader, the 50-year-old grandfather of weekly antiquing publications in the U.S. Each week, readers got a dose of the behind-the-scenes action at the mythical largest auction ever held.

This 80-page hardcover with dust jacket collects the entire first story of Antiques. It also comes with plenty of extras including the non-continuity Christmas and New Year’s strips, a character key and index, a step-by-step guide to the one character who keeps appearing in disguise throughout the story, the exclusive strip that appeared only in the Baltimore Comic-Con 2006 program book, and even one strip that has never previously appeared.

Written by J.C. Vaughn and illustrated by Brendon & Brian Fraim

MSRP:
Now: $19.95
2004 With record prices being paid for them, Big Little Books have again flashed into the spotlight… and now here’s a book to help you capitalize on the sensation: The Big Big Little...