A creation of Mark Gruenwald and Paul Neary, John Walker was introduced in Captain America #323 (November 1986). He grew up in the small town of Custer’s Grove, Georgia where patriotism was bred into him. John idolized his father, an army veteran, and his brother, a military pilot, who died on a combat mission. 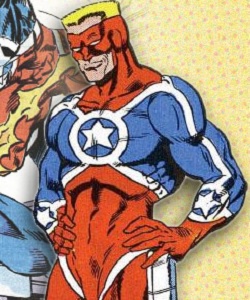 Walker joined the army and met his future best friend Lemar Hoskins during boot camp. He also became friends with Hector Lennox and Jerome Johnson, and had a rivalry with Kali Vries that turned into a romantic relationship. Vries moved on to work for SHIELD, while Walker, Hoskins, Lennox, and Johnson spent two years executing unfulfilling missions. Frustrated by the lack of action, the foursome quit the army to pursue new opportunities.

The Power Broker approached them with offers to give them radiation treatments that would give them superstrength. To pay for the treatments, the guys became pro wrestlers with the help of talent scout Ethan Thurm. Seeing that Walker was very patriotic, Thurm suggested that he take the name Super-Patriot with the other three called the Bold Urban Commandos (or Buckies).

Thurm soon convinced Super-Patriot to become a hero instead and even secured financial backing from a corporate sponsor. It was then that Walker learned how to work a crowd with his impassioned patriotism, which often included criticizing Captain America. They held a rally in Central Park where he expounded on Cap’s flaws before a preplanned attack by the Buckies. Super-Patriot defeated them in the orchestrated fight and was later confronted by Captain America who pointed out that people could’ve been hurt during the staged attack. Walker refused to listen, insisting that his actions were justified because he wanted to replace Cap as the patriotic hero. 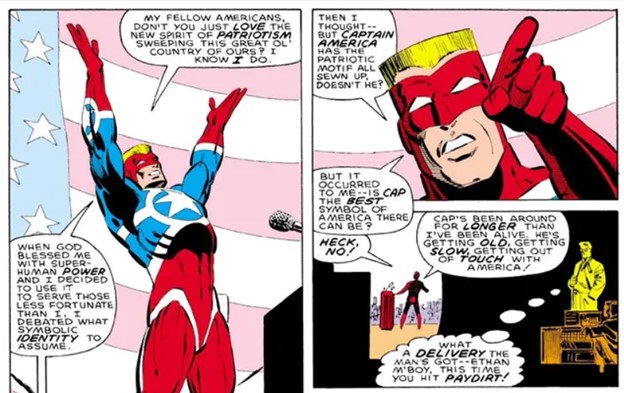 Emboldened by his own rhetoric, Super-Patriot repeatedly challenged Cap to a fight. Since the hero continued to refuse, Super-Patriot attacked Cap, and they engaged in a lengthy fight. Super-Patriot chucked throwing stars at Cap and after seeing them hit their mark – Cap’s chest – Walker claimed to be the winner and left.

He gained national attention after stopping the terrorist Warhead from detonating a nuclear weapon in DC. Using the newfound celebrity status, Walker claimed to be the future of America. Presidential advisor Valerie Cooper was among those who became fans of Super-Patriot and when the US decided to name a new Captain America, she suggested Walker. Though he was initially unwilling to take on the name that he’d been relentlessly criticizing, Walker agreed, believing it was the way to serve his country.