Fear is something we all think about, whether we are the type that enjoys the thrill of roller coasters and scary movies or the ones who avoid the feeling at all costs. For Jonathan Crane, fear is an obsession. Crane is a genius in the fields of psychology and biochemistry, who developed fear-inducing gases and toxins, as Scarecrow.

Batman co-creators Bob Kane and Bill Finger created Scarecrow in World’s Finest Comics #3 (Autumn 1941). Since then, he has been a regular combatant, tormenting the Dark Knight and traumatizing Gothamites.

Jonathan Crane was bullied in school, teased for his gangly, long-limbed frame. On the night of his senior prom, Jonathan donned his trademark scarecrow costume and terrorized his classmates with a gun, causing a car accident that killed one student and paralyzed another.

Obsessed with fear, Crane became a psychologist and took a job at Arkham Asylum where he performed fear-inducing experiments on the patients. He also became a professor of psychology at Gotham University, teaching about phobias. Crane was fired from Gotham U after he took a gun to class and accidentally wounded a student. Wanting revenge for the displacement, he killed the professors who fired him and began his criminal career.During the “Terror” storyline, which was set early in Batman’s career, Scarecrow was a resident of Arkham. Hugo Strange broke him out and began his own form of therapy so that Scarecrow would be smart enough to kill Batman. Scarecrow turned on Strange, impaling him with a weather vane, then locked Strange in his own cellar. He confronted Batman in Crime Alley where he decapitated one of his former schoolmates in front of the Dark Knight. Batman eventually captured Scarecrow with Catwoman’s help. 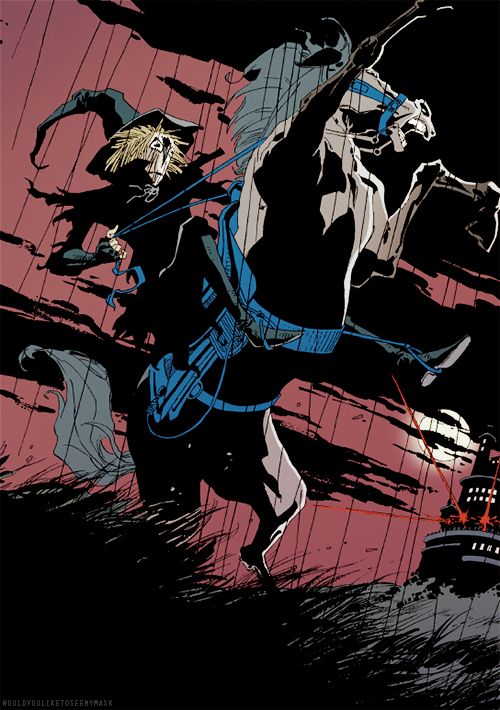 The creative team of Jeph Loeb and Tim Sale used Scarecrow several times in their limited series. In Batman: The Long Halloween, Scarecrow escaped Arkham and gassed Batman with fear toxin, then he robbed a bank with Mad Hatter for Carmine Falcone. He resurfaced in Batman: Dark Victory where he put fear gas in children’s dolls (on Christmas Eve, no less) and he used fear toxin to manipulate Carmine’s son Alberto into trying to assassinate his sister.

Scarecrow and Joker had an alliance (and conflict) in Knightfall and Shadow of the Bat. First, they teamed up to ransom the mayor of Gotham, then Scarecrow betrayed the Joker by spraying him with fear gas. The toxin had no effect on the Joker, who proceeded to beat Scarecrow with a chair. Scarecrow’s next move was to hypnotize college students and make them spread his fear gas until Batman/Azrael and Anarky stopped him.

Penguin hired Scarecrow for a job in “As the Crow Flies” story, then had Dr. Linda Friitawa turn Scarecrow into a murderous creature. Penguin sent the newly transformed Scarebeast after disloyal henchmen. He appeared as Scarebeast again in the “War Games” arc to help Black Mask gain entrance to the Clock Tower, not knowing that the latter’s plan was to throw Scarecrow at it. Crane woke up after the crash and transformed into Scarebeast and caused destruction in his search of Black Mask.In Batman: Hush, Scarecrow created profiles on the villains of Gotham for Riddler and Hush to use to their own advantage. For the follow-up Batman: Heart of Hush, Scarecrow kidnapped a boy then hit the boy with a dose of venom, causing the boy to attack Batman.

When DC content was rebooted for The New 52, Scarecrow’s origin was changed. In the new continuity, Crane’s father used him as the test subject for his experiments on fear. While conducting an experiment, the elder Crane suffered a heart attack and died after he had locked Jonathan in a small room. The boy was trapped inside the test chamber for days, and after he was rescued, Jonathan harnessed his trauma into an obsession with fear. 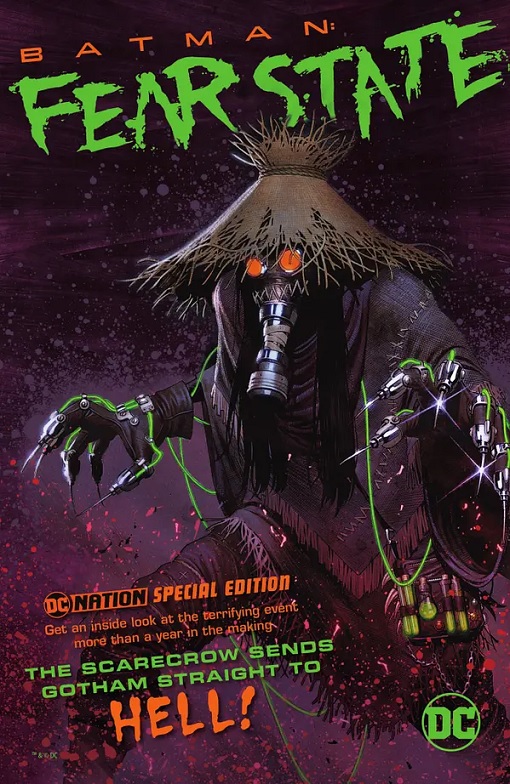 Scarecrow learned that a war was brewing at Blackgate Penitentiary with Bane poised to become a leader among the villains. He also discovered that Talons from the Court of Owls were frozen and stored at the prison. With the help of Man-Bat and Killer Croc, Scarecrow stole the frozen Talons while Bane and other villains made their moves to take over the city. He woke the Talons and doused them with fear gas, then put Mad Hatter’s mind controlling tech in their helmets to control them. Bane freed them from Scarecrow’s control and hung his rival between two buildings. Scarecrow is currently terrorizing Gotham City in DC’s Fear State event. Gotham’s Mayor Nakamura has given scientist and defense contractor Simon Saint approval to create a paramilitary group called Peacekeepers to establish order in the city. What the mayor doesn’t know is that Scarecrow is using Saint’s resources to traumatize Gothamites on a massive scale to instigate the Fear State.

Scarecrow fans and comic collectors will soon have the opportunity to bid on his first appearance. Hake’s Auctions will offer a copy of World’s Finest Comics #3 CGC 4.0 in their next premier event. Bidding opens on October 12, 2021, and the auction will close on November 2-3. 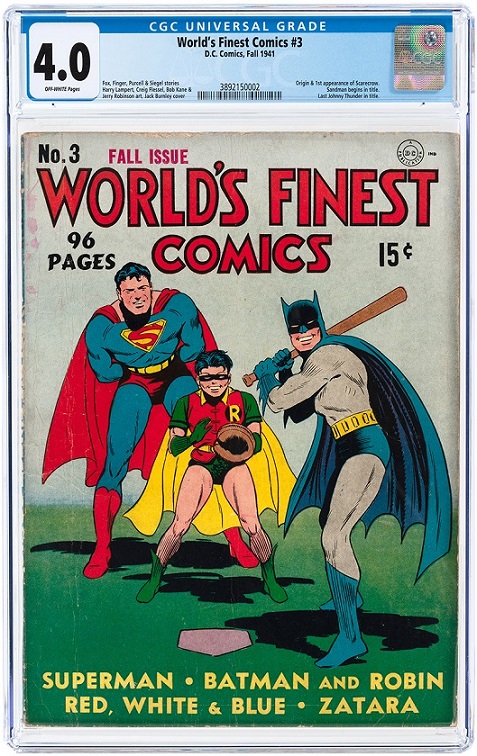