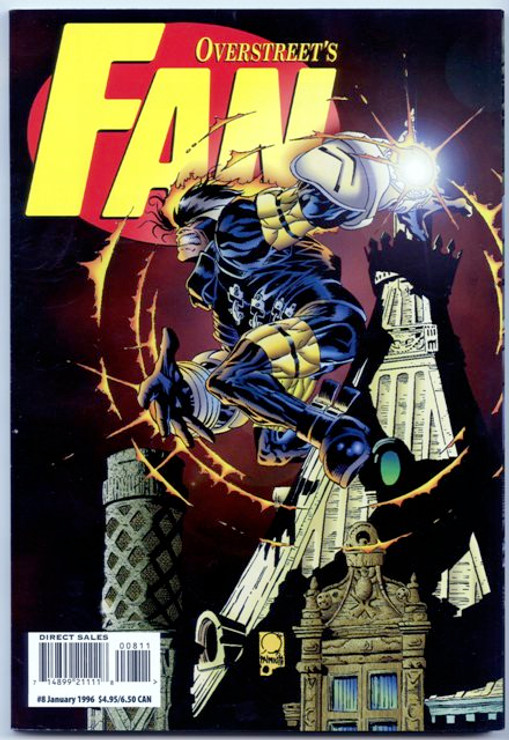 The biggest issue ever, Overstreet’s FAN #8 is the special Year in Review issue that summed up 1995 and looked ahead at 1996. Included in that monster-sized volume were a preview of Marvel vs. DC, a look at previous Marvel/DC crossovers, and “Dreams - A Farewell to Sandman,” a multi-part feature on the end of Vertigo’s Sandman including interviews with Neil Gaiman and many of the artists who contributed to that award-winning series. Related features include a profile of artists Chris Bachalo, Charles Vess and Jon J. Muth. That alone would be enough for most magazines, but not this one. Not even close.

This one also featured a preview of Wildstorm’s DefCon 4, an Ash preview with Event's Joe Quesada and Jimmy Palmiotti, a look at Alex Ross' painting process, a preview of the UltraForce/Spider-Man Malibu-Marvel crossover, a profile of The Comic Book Legal Defense Fund, a preview of the Tomoe mini-series from Crusade (including what we believe is the first published interview with superstar artist Amanda Conner), a look at Parts Unknown and Knight Press, a profile of the legendary Will Eisner, a preview of X-Men titles for 1996, The FAN Awards, "So, Whatcha Reading?" (in which industry folks give their picks for then-current reads), artist Chris Bachalo on the set of the little-remembered Generation X TV movie, a profile of Sam Kieth and his creation The Maxx, a conversation with novelist Alan Dean Foster, and an interview with Jerry Doyle of Babylon 5, among other things. This issue also includes the regular columns, plus market reports, pricing updates and more.